Introduction
In keeping with my guitar circuit project, I wanted to delve into what the tone circuit actually does.  The results were very surprising to me.  I discovered several things about the tone circuit and its implications to the design of my new active circuit.

Voltage Divider and Resistor/Impedance Combination
Let me make sure we're all on the same page with voltage dividers.  This is a very basic idea for anyone familiar with electronics, but for those who aren't, it isn't very complicated.  Recall the idea of voltage drop, that voltage across a resistor is distributed along its length evenly.  If you tap the resistor at a specific point (which is what a pot does), then you will get the voltage at that point.  What you're actually doing is dividing the resistor into two resistors in series, which is also known as a voltage divider. 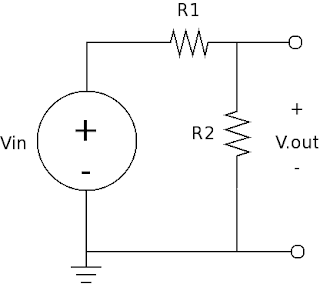 This is your standard voltage divider.

The two resistors can be two halves of a pot, two separate resistors, or theoretical equivalents to several resistors combined according to the following techniques.

Quick definitions:
Series resistors are connected such that one lead on R1 is connected to one lead on R2 with no other components in between.  (such as those in the voltage divider above) 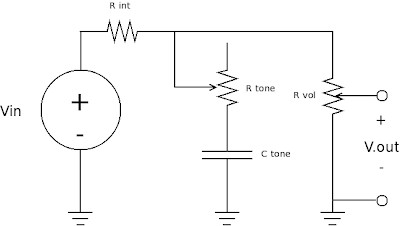 Here I will simplify the pickup model to just an ideal voltage source and a series resistance (R int).  The tone circuit is next in line and is parallel to the volume circuit.

As you can see, only two terminals of the tone pot are connected to the circuit.  The third does nothing.  This makes the pot a simple variable resistor.  I will show the effect of the resistor later. 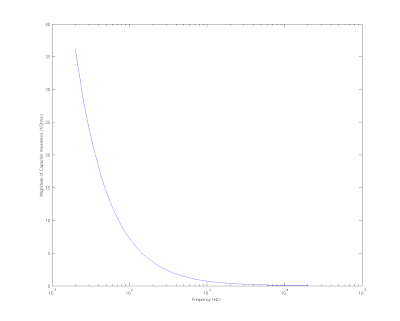 So to analyze this circuit intuitively, let's first consider just the tone circuit and the pickup model.  Crank the tone pot all the way down, so now we have just Rint in series with Ctone.  This is a basic low pass filter.  Look at it as a voltage divider.  At low frequencies, the capacitor has a higher impedance, but as you move up the frequency range, the capacitor is a smaller and smaller proportion of the total load.  So the filter passes low frequencies and attenuates high frequencies.

One thing that I didn't realize until doing this analysis is that the tone circuit depends heavily on the resistance of the pickup itself.  The half power frequency or cutoff frequency of the RC filter is

If you replace the pickup with an opamp, as I have done in the Active Circuit described in a previous post, then R=0, and your filter won't work.  The cutoff frequency will be infinity.  Ideally, the whole tone circuit will have no effect on the signal at all!


The Response of the Circuit

I pulled out trusty old Matlab and made a simulation of this circuit.  My measured values on my guitar were as follows.

The x axis is frequency from 20Hz to 20KHz (the entire audible range).   The y axis is gain.  A gain of 0 indicates no effect on the circuit.  A gain less than zero indicates some attenuation to the volume at that frequency.  The different lines represent different settings on the tone pot (i.e. different values of Rtone). 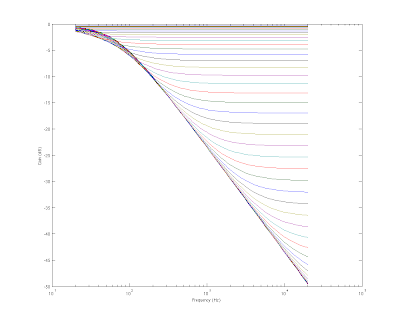 Short Graph Discussion
For those familiar with the Bode plot of an RC Filter, the bottom line should look familiar.  It rolls off at 20dB per decade from the cutoff frequency of about 66Hz.  (Maybe this is why my tone sounds terrible when turned all the way down).  As we increase the value of Rtone, the frequency response flattens out until there is no attenuation at all to speak of.

If we were to remove the capacitor all together, then the filter would be a simple voltage divider.  So when the capacitor's impedance becomes negligable compared to the impedance of Rtone, then the gain flattens out to approximately what a voltage divider would be.  As Rtone increases, the range of effectiveness of Ctone becomes smaller and smaller until it doesn't really affect the signal at all.

Log vs. Linear Tone Pot
I've heard some debate about log vs linear pots on tone circuits.  Let me show you the difference.  The original plot above is for a log pot.  The steps on Rtone are spaced logarithically from 0 to 500K.  The next plot is for a linear spacing between 0 and 500K. 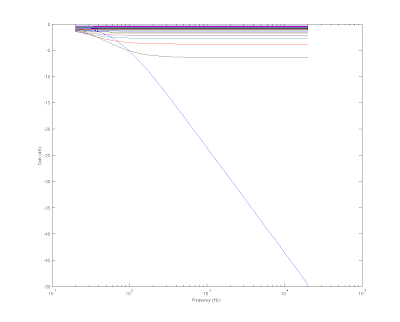 Notice that the available responses are all grouped towards the top.  There are very few response curves that are not practically flat.  There are 50 steps between 0 and 500K in the simulation.  Notice the vast difference between 0 ohms and the first step (10K or 1/50th setting on the pot).  You will be pretty much unable to get any responses between those two, unless you have very very steady hands.
So I believe this is pretty strong evidence that maximum control over the tone can be had using a logarithmic pot instead of a linear pot.
The Meaty Part: Analyzing the Effect of Rtone

Here's where things get a little more difficult to explain intuitively.  I worked and worked to get an analytical solution to this circuit.  I probably should not admit that, because it's a very simple circuit.  But part of my problem was that I was convinced that my answer was wrong when it was not.  Let me explain.  The equation for the gain of the circuit is

Obviously, this is a not very intuitive.  But how about an equation for the cutoff frequency?

Ok, this is a little bit better, but still not great.  I can see that the equation is very similar to the original, except that R is replaced by an uninviting square root.  Wait!  Notice that under the right circumstances, the quantity under the square root is actually negative.  If you're reading this blog, then you probably know that negative square roots will not produce real numbers.

This was the point at which I kept checking and rechecking my work.  But then I realized, that this is exactly what we observe in the response plot above.  After a certain setting on the tone pot, the response never dips below -3 dB.  Just what is this setting?  If we set the quantity under the square root greater than 0, then we get...

Very interesting!  So pretty much all frequency responses of note fall within the range of 0-26KOhms on Rtone.  That's only the first 5.2% of the pot!
To verify this result, I altered the simulation to graph only from 0-30KOhms.  Here is the graph. 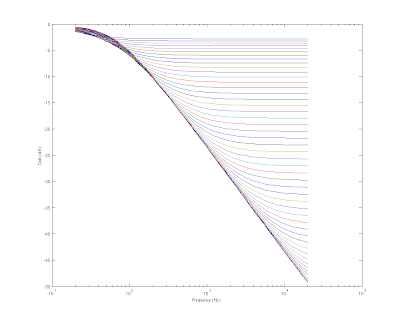 Obviously, we've spanned all of the useful range of frequency responses in the first 5.2% of the pot.  But what is the effect on the cutoff frequency? 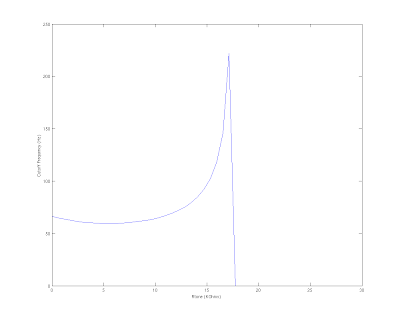 Answer: Pretty dismal.  Yes there is a big peak at about 17KOhms, but if you look at the x axis, the majority occurrs between 15Kohms and 17Kohms.  Other than that, the response is pretty flat.  So we're taking about most of the change in frequency is between 3% and 3.4% of the pot.  Not very practical.
By the way, the reason for the descrepancy between 17KOhms as the cutoff and 26KOhms is because I neglected Rvol in my analytical solution.
Apparently, adjusting Rtone is a crappy way to move the cutoff frequency.
Load Presented to the Pickup
I also checked the load impedance to the pickup.  As I've shown in a previous post, the values of the pots greatly affect the signal strength and frequency output of the pickups.  So it is of interest to us how adjusting the tone pot will affect the load on the pickups.  Here is the chart. 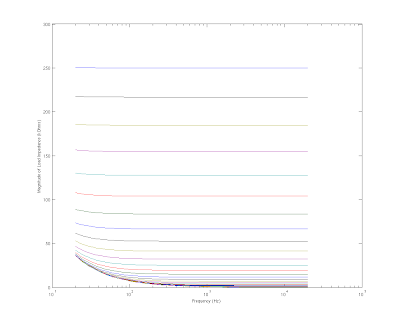 If you do the math, the parallel combination of the two pots is 250K.  Looking at the plot, the larger Rtone becomes, the more closely the load approaches 250K.  The impedance of the capacitor was shown early in this post.  So basically, low tone pot settings will cause a double whammy effect on cutting the highs.  Since I didn't model the pickup with any inductance, this is not shown in the simulation, but you can combine the earlier article on pot resistances with this one to see that the effect will be heightened.  Both the low impedance load and the low pass filter will tend to cut the highs out of the signal.
Conclusion
That was a lot of information about the tone circuit in a guitar.  Here's the source code for my simulation...
Posted by Bill at 8:10 PM